Welcome to the World of Horseracing

Record of the blog selections

THIS IS A BOOKIES ADVERT FREE ZONE

There are NO affiliate links on this site to bookies from whom the author receives over 30% of the stakes from your lost wagers.ising selections on which to wager, since March 2010.

An interesting day of racing lies ahead which, after the tremendous "sabre rattling" of the Irish-based trainers at the Dublin Festival last weekend - will it be a complete clean-sweep for the Irish of the championship races at the Cheltenham Festival - further exposes the lack of depth in the UK training ranks.

We have 3 meetings at Newbury, Warwick and Uttoxeter, and it's at Warwick where I'm going to start as there are 3 good races to consider. The "listed" hurdle over 2m5f at 1:35pm only has 4 runners but a couple - Whitehotchilifili and Get A Tonic - have little chance of winning unless the other pair - Marie's Rock and Indefatigable - run well below form. I'm not convinced that Marie's Rock is worthy of an OR140 rating, but I know for sure that Indefatigable is capable of OR147 and she is in good form too. Odds of 11/10 are short, but she could well go off at odds-on; and this could be a day for a short-odds multiple wager.

The next race on the card at Warwick is the "Kingmaker" novice chase over 2-miles at 2:05pm and again only 4 horses compete. For Pleasure has no chance, and while Brave Seasca has won his last 3 chase handicaps, this race is a massive step-up in class. For me, Third Time Lucki is overated at OR153 by about 7lb; he could be 150+ but he's not shown that capability yet. There is no doubt Edwardstone is a class 2-mile novice chaser and I agree with the handicapper and accept his OR159 rating, and that should make him odds-on for this race but you can find "evens" in places. He's another one for the short-odds multiple wager.

That Class 2 handicap Chase over 2m4f at 3:15pm looks a cracker of a race. The LTO winner Falco Blitz (who we were on 4 weeks ago when winning at 7/1) looks fairly treated being raised only 3lb for that win. The French import Celebre D'Allen has won his 2 hurdle races since arriving at Phil Hobbs yard, and this is his UK chase debut. This 10yo last won a chase in France in  November 2018, that was over 3 years ago! Sure, he is leniently treated by the handicapper on OR135, but I have doubts. I was on Jacamar LTO at Cheltenham, and he was let down by a very poor jumping display in that hot handicap, and he won't find it easier today - he could struggle again.  The Irish raider Dinny Lacey looks to have a tough task here off OR137. The trip is a new one for Cheddleton, and there's a doubt he will stay, but he is in good form. Lieutenant Rocco could be interesting, but his last run when pulling-up was disappointing and his jumping can be sketchy.  The King Of May bounced back LTO and has gone up 7lb to OR130; but I'm not convinced he's up to winning this.  All-in-all, it looks like a good opportunity for FALCO BLITZ to follow-up on his LTO win, and odds of 5/1 look very fair.

At Newbury the opening race has the top Paul Nicholls novice chaser Bravemansgame looking for his 4th chase win on the bounce. He looks potential Grade 1 staying chaser, but he has a tough task giving 16lb to the promising handicappers Grumpy Charlie and Pats Fancy. Of that pair, Pats Fancy looks the better treated given the way he easily beat the subsequent handicap winner Imperial Alcazar, and odds of 9/2 look fair, especially as the Nicholls stable is out of form (just 1 win in the last 14-days from 37 runners).

The Denman Chase over 2m7f at 2:25pm is a race to watch but not wager on. Clan Des Obeaux should win this as the ground will not be soft enough for Royale Pagaille. But then, with the Nicholls stable not firing this past few weeks, and the ground doubt for Royale Pagaille, we could be in for a surprise result - definitely a race to watch and not wager on!

That's it for me; I've looked at a lot of races and time now to place the wagers. 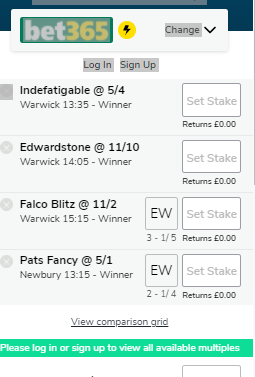 If you have benefitted from the blog content, please make a small donation, thanks

Result Pages for the blog tips

Popular Posts of the past month